Have you ever asked yourself...what recipe can I make with Nutella and peanut butter? Well, I have the answer and it tastes amazing! Spoiler alert - it's my easy peanut butter brownie recipe! 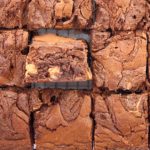 These are everything a good brownie recipe should be, dense and chewy - moist and cakey on the inside with a lovely crackly top. Add to that the flavour of peanut butter and you have a match made in brownie heaven. I am just so in love with that sweet/salty flavour combination.

Plus you all know I love an easy recipe, and this recipe for Nutella brownies with peanut butter is one of those.

HOW TO MAKE MY EASY PEANUT BUTTER BROWNIE RECIPE

You can follow along with my step by step pictures below!

Using a handheld mixer, cream together room temperature butter and sugar until fluffy and combined. Then add the eggs and vanilla, mixing to combine (see photos below). 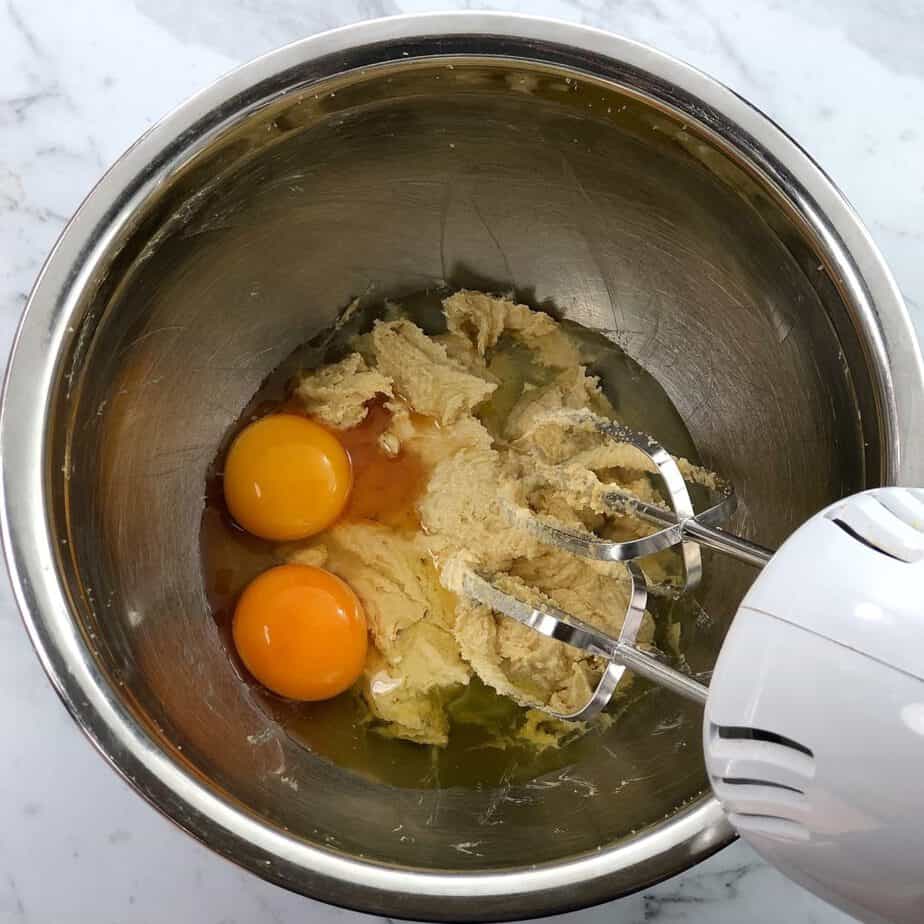 Add the Nutella to the butter/sugar mixture and mix to combine using the handheld mixer. Then add flour to the mixture and mix by hand until just combined (see photos below). 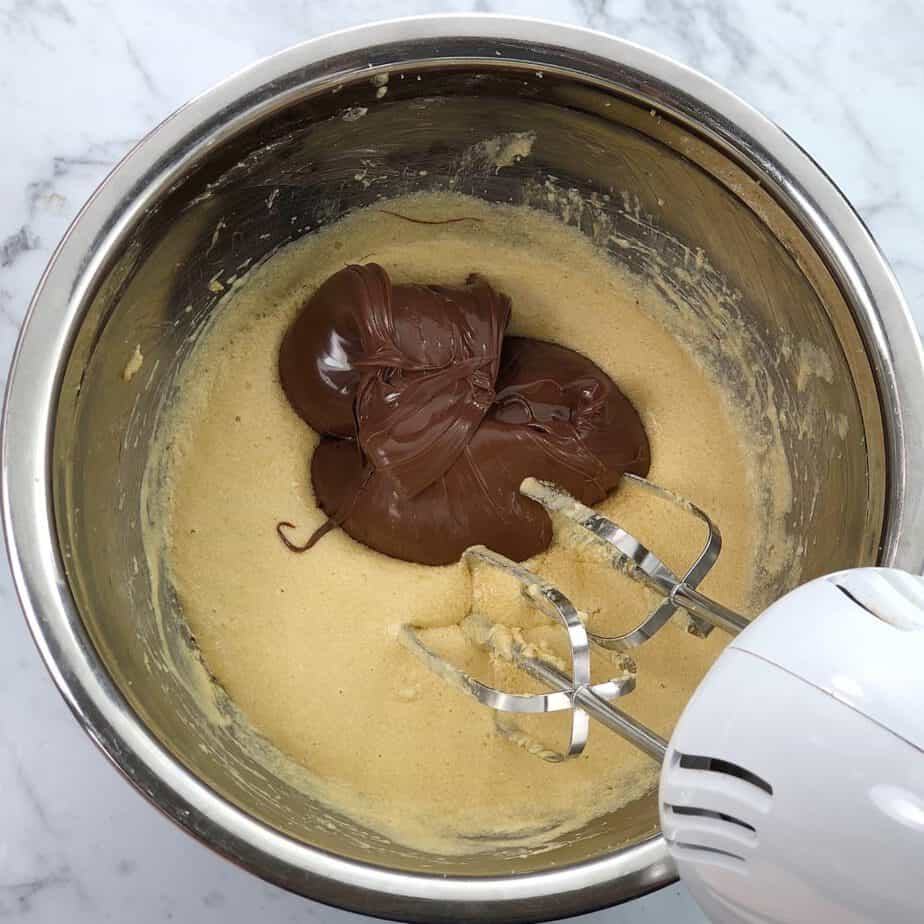 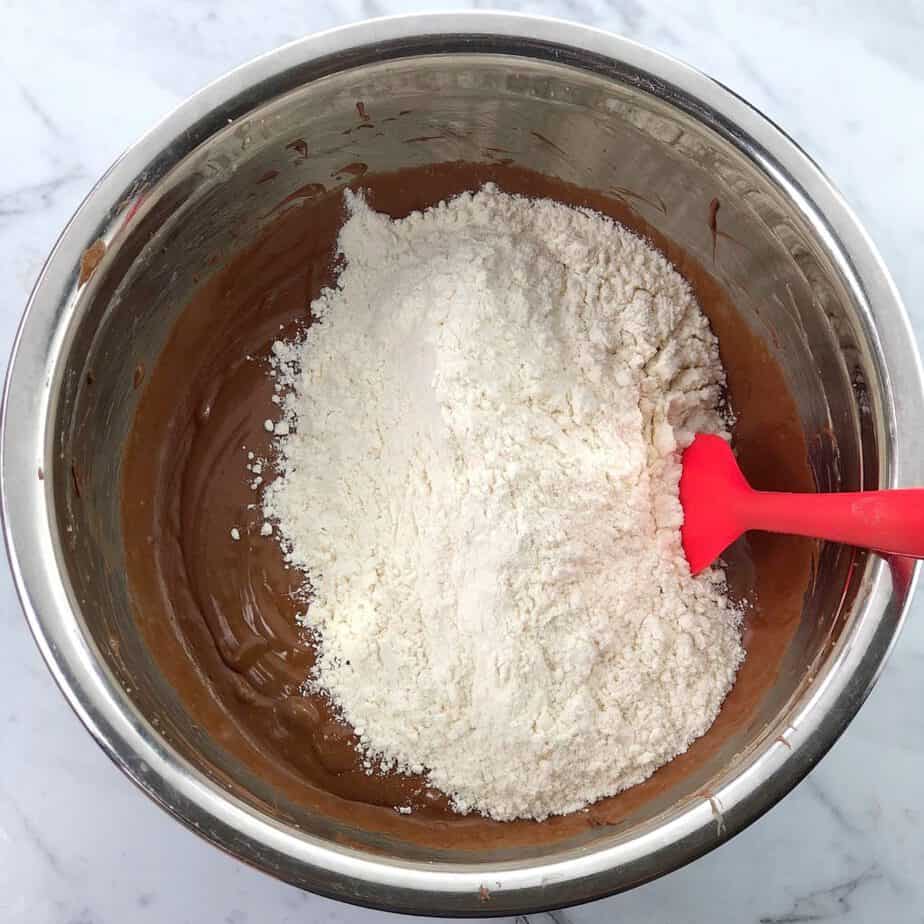 Once the flour is combined, add chocolate and peanut butter chips, again mixing by hand to combine (see photos below). 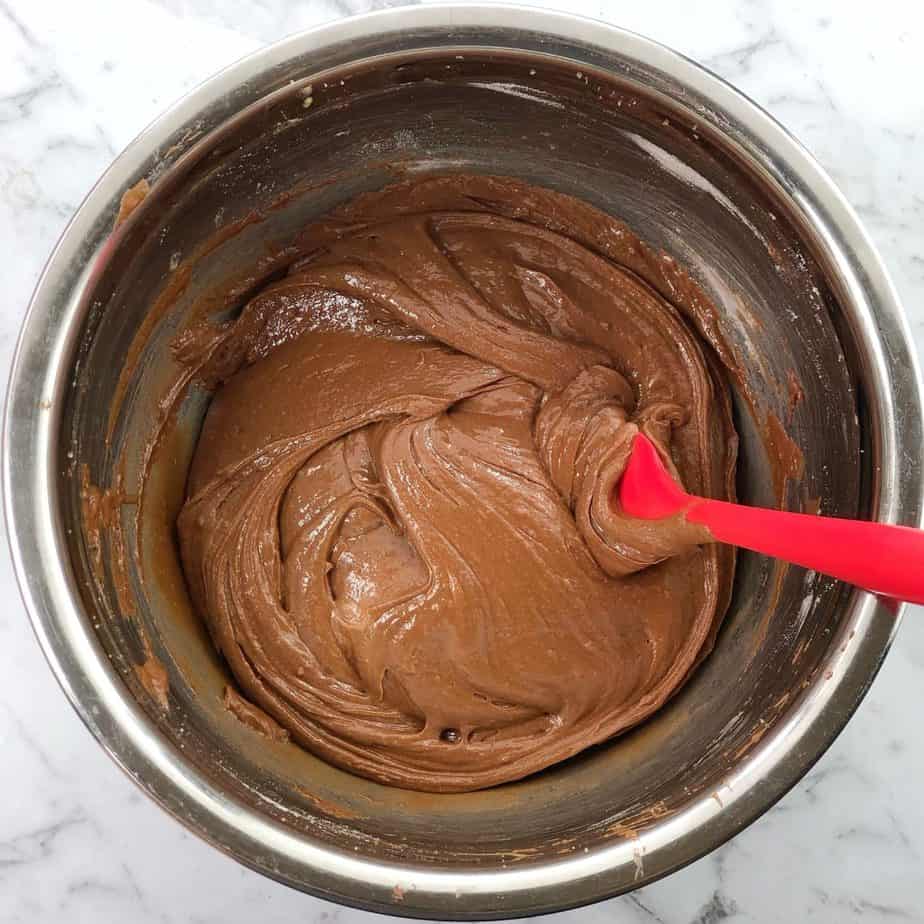 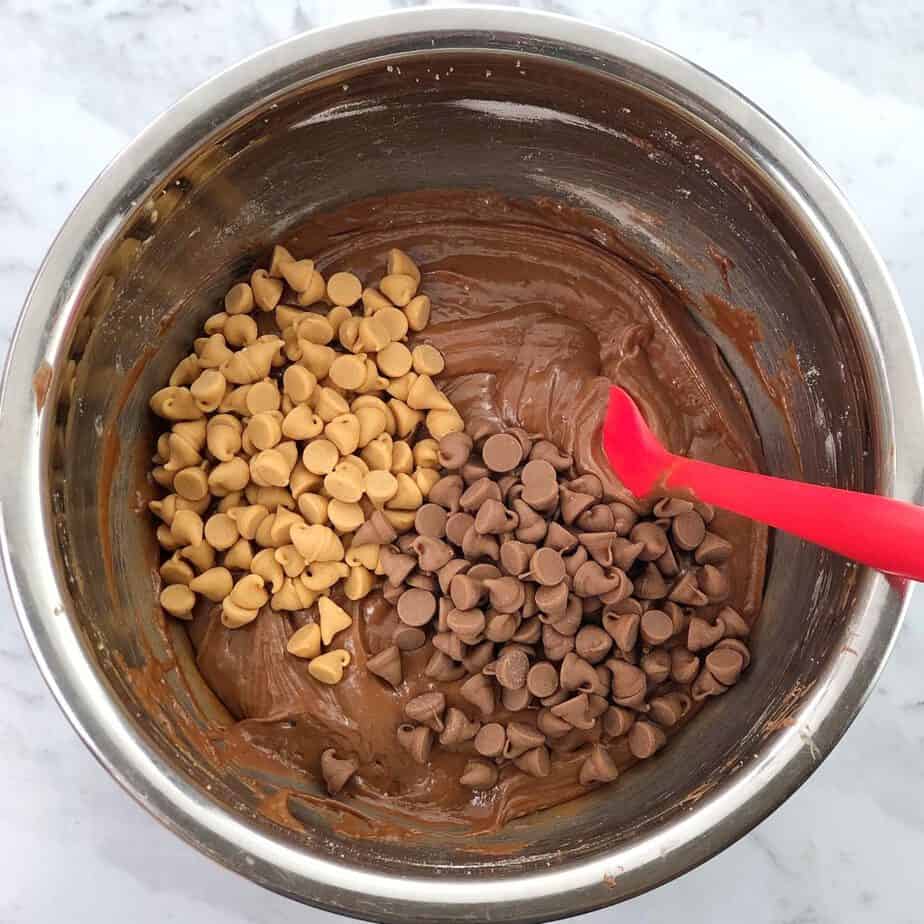 Pour mixture into prepared tin, and place spoonfuls of combined peanut butter and extra Nutella evenly over the top of the mixture. Then swirl these dollops into the mixture using a knife - now you are ready to bake! 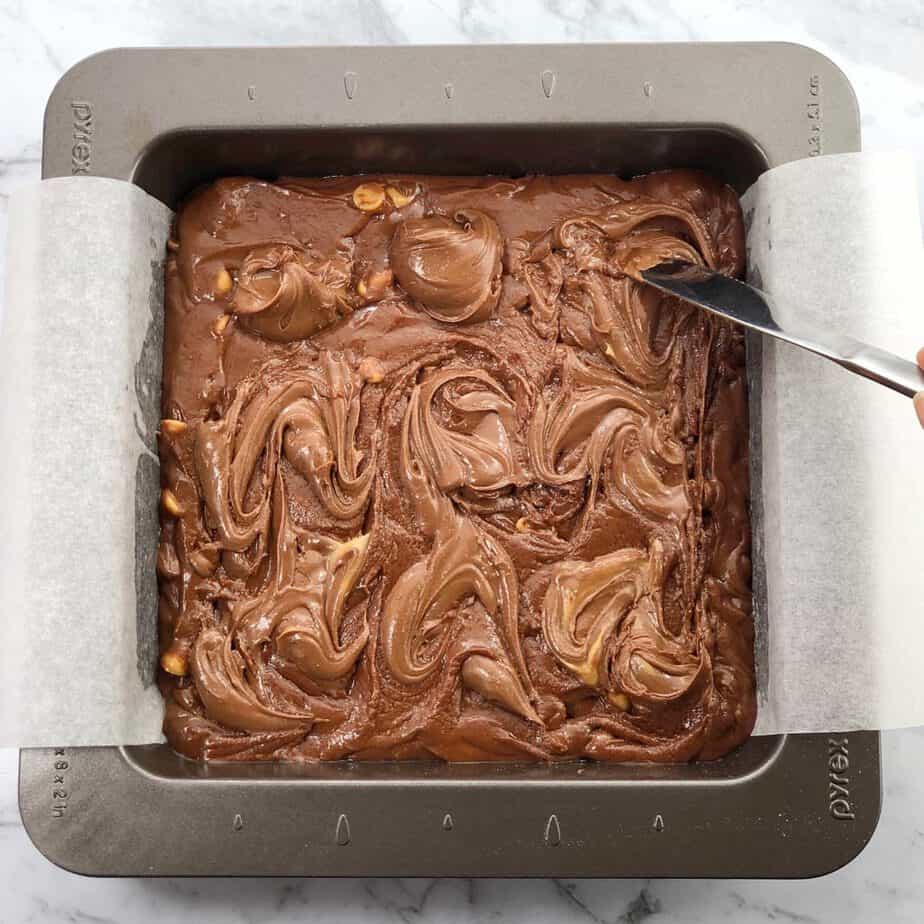 Chocolate Peanut Butter Bites with Pretzels - sweet and salty in one bite!

Including Nutella in this peanut butter brownie recipe takes me back to my teenage years having sleepovers with my bestie (who is still my bestie BTW) and eating Nutella! So Good! It's a shame we didn't know how good it would be with peanut butter back then - you live and learn. My palette must be getting more mature!

This brownie recipe is going to be popular, maybe buy extra big jars of peanut butter and Nutella for your next sleepover...

I always like to leave some baking paper overhanging the edge of my baking tins when I line them - this gives you a set of "handles" to help remove the finished product from the tin. The cook time in my oven was 34 mins, of course this will vary as everyone's oven is different. I would recommend checking the brownies at 30 mins and then going from there. Plus, in my humble opinion the best brownie is an under-baked brownie! I always think it's better to under-bake rather than over-bake a brownie! I've had a few Australian readers ask about peanut butter chips. These are similar to chocolate chips, but peanut butter flavour. You can find them in the baking aisle near the chocolate chips. If you can't find them you could also substitute more milk chocolate chips, or use white or dark. *Please note that the amount of calories per serve is provided as a guide only, as ingredients and cooking methods can vary greatly*

This site uses Akismet to reduce spam. Learn how your comment data is processed. 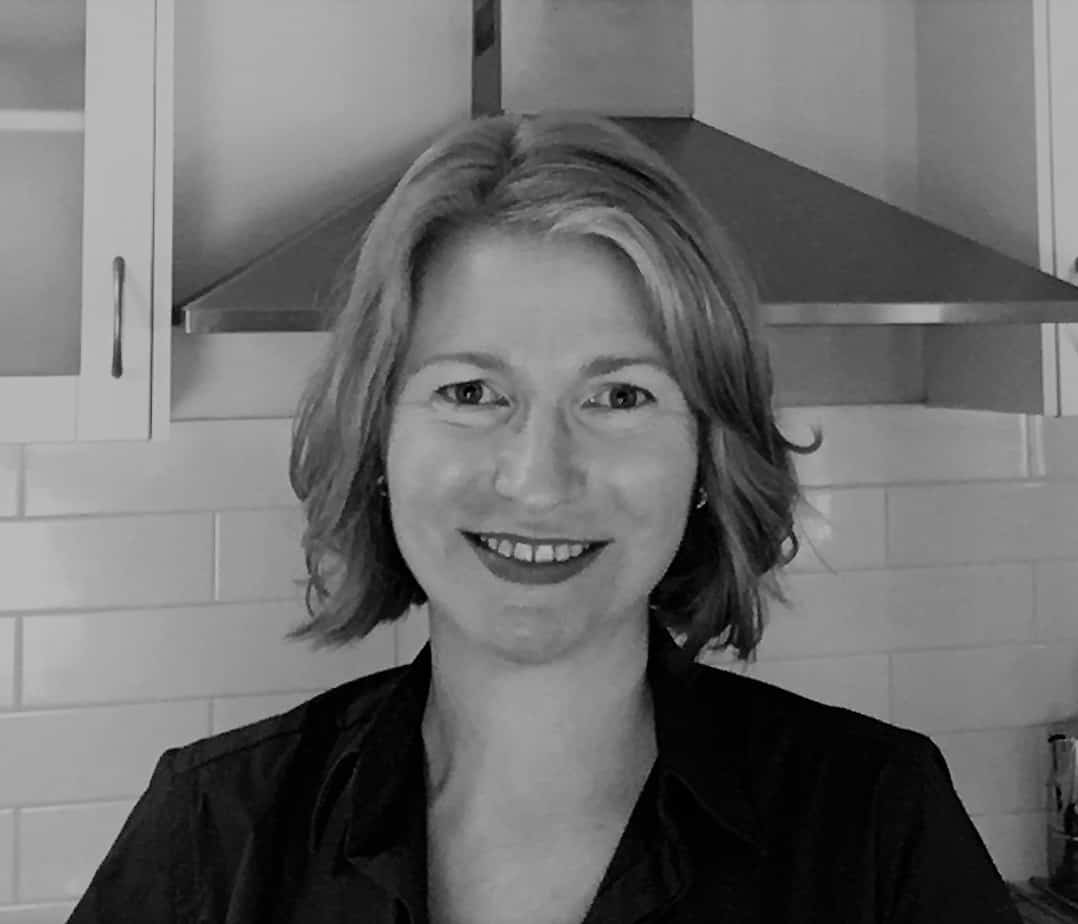 Looking for inspiration for what to cook tonight? I'm here to help! I believe you don't need fancy ingredients or equipment to cook great food! Read More...

Join my free email list and receive my FREE eBOOK of kitchen hints & hacks, plus my most popular & favourite recipes!

Not sure? Click on the "read more" page link above (next to my photo) for more info & what to expect! 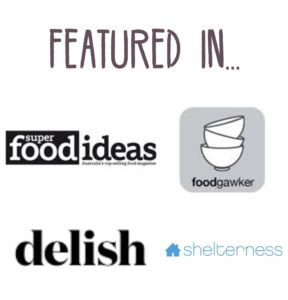