This post is the recipe that started me on the road to food blogging...Caramelised Ragu With Hidden Veg Pasta Sauce. Basically what we in Australia would call Spaghetti Bol.

I entered a recipe competition run by Super Food Ideas - a leading Australian recipe magazine - called "The Great Aussie Spag Bol Challenge 2016" and was lucky enough to be chosen as one of the four finalists. 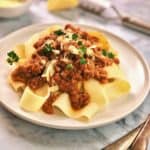 I didn't actually WIN the competition, but still as they say..."it was a privilege just to be nominated!" I didn't realise how true that sentiment was until that competition. Being a finalist gave me the boost in confidence I needed to start the food blog that had been on my mind for years.

This sauce is a rich and meaty ragu, packed with veggies (that the kids won't see) and with a super easy secret ingredient that everyone has in their fridge - milk! I know it sounds weird but I promise you it's not! In fact, anyone who doesn't know about the milk won't even realise it's in there. When the milk cooks down it adds a richness that makes this much more than just plain old Spag Bol! 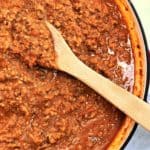 My recipe now has red wine vinegar, which I didn't have in my original recipe. When sharing this recipe with a foodie friend of mine, Lochie, he mentioned he puts vinegar in his spag bol...so I thought I would try it and he was right - it really helps round out the flavour. Thanks for the tip Lochie!

The other great thing about this recipe is that it freezes like an absolute dream! I always have some in my freezer, and it's great as an emergency dinner because it doesn't take long to defrost if you freeze it flat in ziplock plastic bags (L O V E those!) in 2 portion sizes. 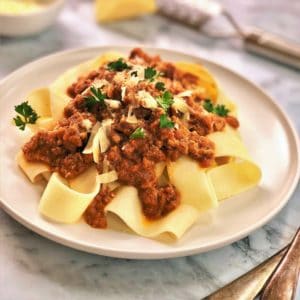 It is really important to let a good layer form at the bottom of your pot at each step, this creates the deep rich flavour. Be careful not to burn it though - especially if the surface of your pot is a dark colour. The amount of time it takes for the moisture to evaporate at each step will also vary with the size of your pot. To make this amount you will need a very large pot! I have put the amount of portions as 8-10 as the serving size will vary by the person. Keep in mind this recipe is really filling - it can be a bit deceptive. What might seem like a small portion is not really that - the milk makes it very rich. The portion size I usually aim for is about 1 cup of ragu for my husband, and ¾ cup for me. This sauces freezes REALLY well. I put portions of 2 into plastic ziplock bags, lay flat, label and freeze. (Even if you want to feed more that 2, I still would recommend freezing in portions of 2, because it makes it so much quicker when it comes to defrosting.) Minor update 05 April 2018 - I have changed the order in which the bacon is added - now at step 6 rather than with the mince in step 4.

Looking for inspiration for what to cook tonight? I'm here to help! I believe you don't need fancy ingredients or equipment to cook great food!