What if I said blondies? How about almond butter blondies? Why don't we add raspberries? Maybe melt & mix? See where I'm going with this? 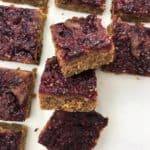 These Almond Butter Blondies with Raspberry are soft and moist, just like a blondie should be in my book. They are also not overly sweet. AND they are melt & mix - so cool. They also use my special trick for getting blondies (and brownies - see my recipe for No-Crust Fig Brownies) that are soft all the way to the edge - cooking them in a water bath - not nearly as complicated as it sounds!

When these blondies got taste-tested here at home, I gave one to my husband Peter to try just before we sat down to lunch. One bite, then two, then gone! His words were "I decided I was only going to have one bite, but that was before I tasted them!" Resolve broken! I win again! He started off not wanting to spoil his lunch (aaawww) but couldn't resist. Winner.

If you like the simplicity of melt & mix recipes, I have included in this post a link to my most popular recipe to date, my Easy Date Slice - another super simple melt & mix recipe. If you love the flavours of sticky-date, then this is the slice for you, and as the title suggests...really EASY to make.

The only problem is now that the genie is out of the bottle and these blondies are such an easy possibility...serious diet issues here at home...maybe we could just have one square each...sure... 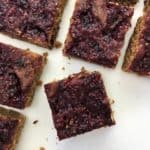 You don't need to thaw the raspberries on the bench for any longer than it takes to make the recipe. I find that when I buy frozen raspberries there are whole berries and also a lot of raspberry pieces. When I first put them in the bowl on the bench I break up any large clumps with my fingers - don't squash them too much. Just before you mix the jam and raspberries, break any whole raspberries up by lightly squashing them between two fingers. Sieving out the seeds in the raspberry jam is a personal preference for me - it's not an absolute must. (There are seeds in the frozen raspberries anyway) I just find the seeds from the jam have already been heated to make the jam, and cooking them again tends to make them quite hard - harder than the fresh seeds end up. Again, personal preference. The jam also gets runnier the hotter it is, which makes it easier to mix with the raspberries without ending up with a total puree! I like to give a little bit of texture to the top of the blondie mixture after the raspberry mixture goes on top, just to add a bit of interest. *Please note that the amount of calories per serve is provided as a guide only, as ingredients and cooking methods can vary greatly*

Looking for inspiration for what to cook tonight? I'm here to help! I believe you don't need fancy ingredients or equipment to cook great food!